Premier League previews are springing everywhere, so I'll give it a try building on my last post about managers! This preview will be reviewed in the beginning of September, after the transfer deadline, as I still expect some game-changing market moves.

Watch several Chelsea matches and focus your attention on Eden Hazard, he is the best Premier League player so it should not be that bad! Key questions: where is he receiving the ball? How many opposing players does he have to face before entering a danger zone? Do the same exercise with Lionel Messi under Luis Enrique tenure! The point here is that Chelsea attacking system is so stiff and risk averse that the weight of creation is on Hazard shoulders since the first phase of construction. 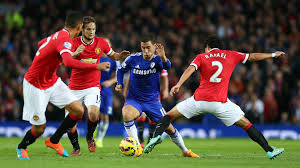 In a sense, Eden Hazard has to be Chelsea's Schrödinger Cat, especially while Diego Costa is spending time with Eva Carneiro in the medical department. The limp wings issue doesn't help the cause as Azpilicueta plays on the left while being right-footed and Ivanovic is a defensive minded right back (the best in the world if football was just defending). Enough of all this negativity, they are the champions and the favourites for the Premier League title, but why? Because they are by far the most solid Premier League side from a defensive and mental perspective! Jose Mourinho is a genius war strategist and he knows that this defensive stability differentiates them from the other rivals! Is it pretty? No, and it's also very risky, especially if they can't revive Falcão, as they will be completely dependent on two players: Hazard and Diego Costa. 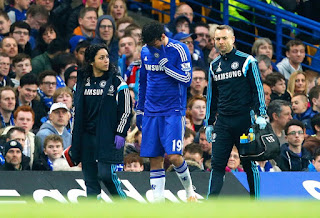 Nonetheless, I believe they will buy an offensive minded left-back to improve the team offensive dynamic. Also, in the beginning of last season Chelsea proved to be capable of playing free-flowing attacking football (with Fabregas exceling!) so a lot can change during the season. All being said, I think they are fairly classified as top dog!

Man City – Do we really need to defend?


First of all, I admire Manuel Pellegrini! His football conception really makes the most technically gifted players shine: Riquelme (Villarreal), Isco (Malaga) and now Silva are good examples. They play a suffocating possession-style football and it’s not unusual to see them exchanging passes in the final-third of the pitch with the opposition defense inside their own goal area.

The Citizens are the most dominant team in the Premier League and when things go their way they can really thrash the opposition. During the season, you´ll get some 5-0, 6-1 results for them which you won't get from Chelsea. Attacking-wise, they know it all as they can also hurt the opposition with fast transitions. That said, Pellegrini has a total disregard for the defensive organization of the team. The transfer window it´s still open, but the fact they bought Sterling and are associated with De Bruyne, when Martin Demichelis is a potential starter baffles me. I'm maybe being too harsh as Pellegrini defensive paradigm makes defenders look bad, but still, Demichelis is not a top player anymore. 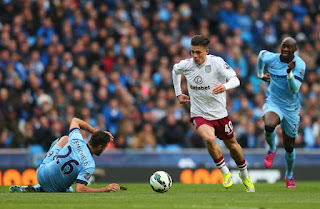 One can say that Pellegrini goes by the saying, “if you have the ball, you can´t concede” and truth be told, they can impose their possession game in the vast majority of Premier League matches but, when they play top European teams, in Champions League, their fragilities are exposed big time. I love trading those games, is a shame they only come 3 or 4 times per year! Still, if Bony can help Aguero transform their possession in more goals (which was a problem last year!) as a solution to compensate their defensive woes, they can be a very dangerous contender to dethrone Chelsea.
Posted by Unknown at 13:47